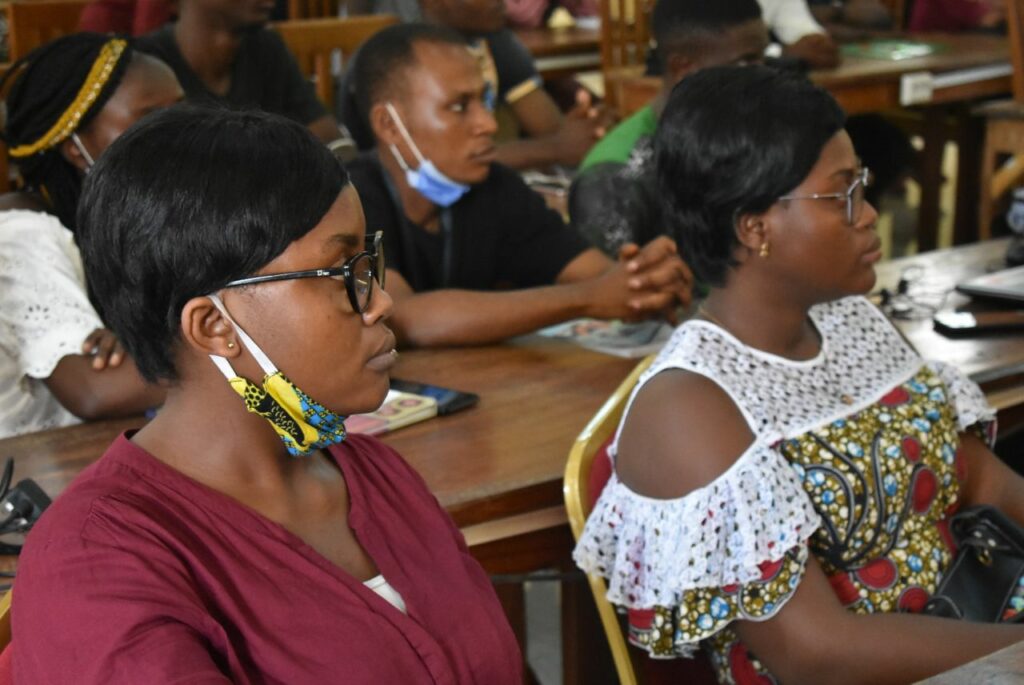 45% of the 60 students admitted to AIMS Cameroon this 2021-2022 academic year are women. The 27 female students are from Cameroon, Nigeria, Kenya and Sudan. Last academic year, women made up 43% of the students enrolled.

“In the yesteryears, the intake of female students hovered around 30%. But late Prof. Marco Garuti’s arrival as Academic Director, we moved to between 40% and 45%,” said the Centre President Prof. Dr. Mama Foupouagnigni during the Academic Orientation session for the new 2021-2022 Structured Master’s degree students on September 17, 2021.

He revealed that with 6000 applications received every year in the entire AIMS network, only about 300 are admitted. Prof. Mama is also the Chief Academic Officer of AIMS Global Network. At AIMS Cameroon, 6% of those who applied were admitted, 3% of whom are women. “At AIMS, we implement gender mainstreaming and gender inclusion. We want to reach the target of 50% gender equality in STEM,” said Honoré Youfegnuy, the Chief Operating Officer during the Academic Orientation session

AIMS Cameroon’s commitment to foster gender equality and inclusion is materialized in its gender diversity, participatory teaching approach and ensuring equal success for all by providing a range of student services such as academic support, professional support as well as the Gender and Inclusion Focal Point (GIFP). The GIFP, Ms. Ngeche Doris Nkwate, leads the planning and implementation of specific gender activities at the Centre level, promotes the engagement of all students in outreach activities and ensures that students feel safe and are treated equally. Among attitudes and values that foster gender equality and promote Diversity and Inclusion are equity and respect; challenging any negative attitudes, as well as avoiding stereotypes and statements that generalize.

Several success stories today across the world are telling examples of the AIMS Cameroon’s commitment to promoting women’s inclusion in STEM education.

In academia, 2015 Alumna Dr. Aja-Fowé Angèle has just obtained a Doctor of Science in Computational Materials Science at the University of Sâo Paulo in Brazil. 2018 alumna Dr. Antem Ebude Yolande Ebong has also just defended her Professional Doctorate in Engineering at the Eindhoven University of Technology in the Netherlands. 2016 Alumna Margaret Ikape is currently a Ph.D. student in Astronomy and Physics at the University of Toronto in Canada. The 2018 Valedictorian Moutamal Maryse Manuella is currently a Ph.D. student working on Control Theory at AIMS Cameroon Research Centre while 2020 Cooperative Master’s alumna Gaelle Patricia Talotsing is also doing a Ph.D. in Computer Sciences at Mobile Computing and Networking Research Laboratory at Polytechnique Montreal in Canada.

In the corporate world, 2017 Alumna Jeannette Mukamahame Gahunga is in charge of conducting internal IT audits at Ecobank Rwanda while 2020 Cooperative Master’s alumna Glorie Metsa Wowo is a Scientific Officer in Artificial Intelligence at the International Crops Research Institute for the Semi-Arid Tropics ICRISAT Manobi Africa in Dakar, Senegal. In Zambia, 2018 alumna Esa Zya has founded a start-up called Agpay Social Enterprise that improves access to Finance and Afro-dealers through the use of modern technology.

AIMS Cameroon is thus ensuring that women are among Africa’s brightest students that it trains to flourish as independent thinkers, problem solvers, and innovators capable of propelling Africa’s future scientific, educational, and economic self-sufficiency.