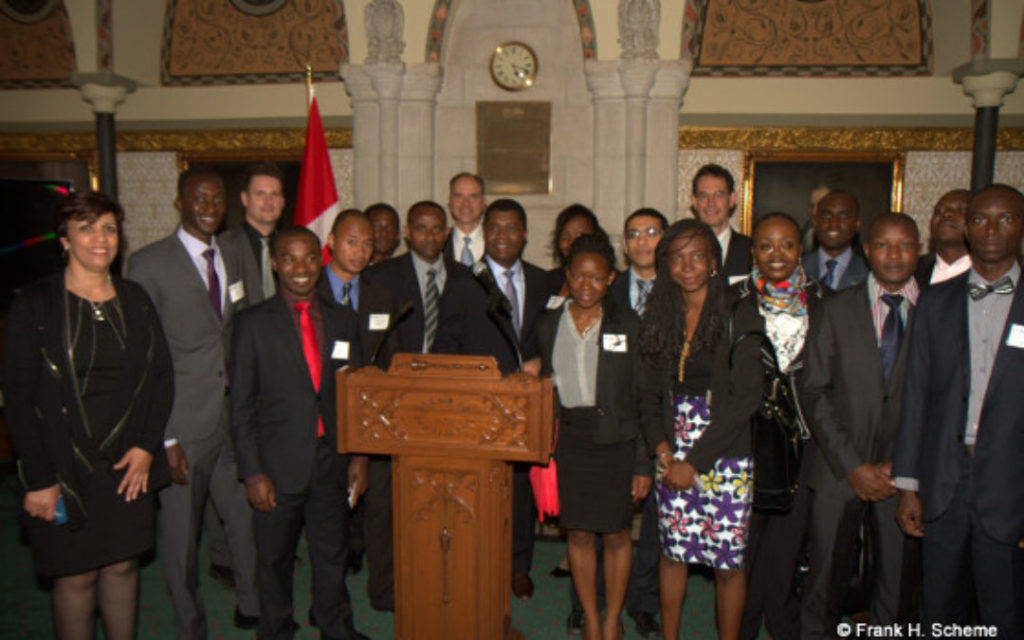 Ottawa, Ontario (October 1) – The African Institute for Mathematical Sciences, or AIMS, arrived on Parliament Hill this week with a stunning update on its Next Einstein Initiative. Though the next prodigy still eludes, with Canada’s help AIMS has produced an impressive array of more than 731 graduates from 41 African nations with more than 30 per cent of these scholars being women.

AIMS Chairman and Founder Prof. Neil Turok and President and Chief Executive Officer Thierry Zomahoun celebrated with a special update for parliamentarians and diplomats at an event on Parliament Hill.

“We are proud of what we’ve accomplished,” says Zomahoun. “Next year we expect to graduate our 1000th scholar and with continued Canadian support we are proving that together we can make a difference creating a new generation of scientists in Africa.”

The effort is timely as economies in Africa have been experiencing phenomenal growth in the past five years. The Economist forecasts that from 2011 to 2015, seven (Ethiopia, Mozambique, Tanzania, Congo, Ghana, Zambia and Nigeria) of the world’s ten fastest growing economies will be in Africa. These countries will expect to see economic growth rates between 6.8 and 8.1 per cent. The demand is exploding for a generation of youth that apply science and math to ensure rapid and stable social, economic and political development.

Only six per cent of post-secondary aged Africans are enrolled in apprenticeships, colleges or universities, compared to the global average of 26 per cent (UNESCO Institute of Statistics, Montreal, 2010). In Europe and North America the enrollment ratio is as high as 80 per cent. In Canada, the enrollment ratio is about 75 per cent of post-secondary aged Canadians (World Bank 2011). The AIMS – Next Einstein Initiative (AIMS-NEI) is playing a major part in closing this gap in Africa, having opened centres of excellence for postgraduate training, research and outreach in South Africa, Sénégal, Ghana, Cameroon and Tanzania. The plan is to create a network of 15 centres across Africa graduating thousands of mathematical sciences experts – half will be women – annually by the year 2023.

Turok, a South African-born physicist known for his work in cosmology, developing and testing theories of the big bang, founded AIMS in 2003. He believes that building capacity in mathematical science is one of the smartest ways to contribute to Africa’s development, by investing directly in talented young people, in an efficient, transparent and highly cost-effective way.

“Our concept is simple. We bring together top global minds in math and science to teach and research with Africa’s brightest students,” says Zomahoun, a McGill University management graduate. “Our graduates then use these skills to tackle problems ranging from disease and famine to environmental degradation, illiteracy and poverty. AIMS graduates have a broad-based training and are talented problem solvers and innovators.”

AIMS’ success has made governments and key technology businesses sit up and take notice. The Canadian government made a major investment of CDN$20 million in 2010. The United Kingdom and Germany have also invested in the project. Twenty-six universities from Canada, Europe, Asia and Africa are participating, including the Universities of Ottawa, Guelph, Waterloo, British Columbia, Simon Fraser and Victoria.

“We are grateful for the support we are receiving from governments in Africa and abroad,” Turok says. “Canada’s contribution was seminal and we are now seeing the impact with our graduates taking on leadership roles building Africa’s self-sufficiency in education, research and industry.”

Why focus on mathematical sciences? Because mathematics underlies every modern technology from plumbing to electricity, to smartphones to satellites. Its applications range from modelling and planning for economics, communications, transport, energy and health. Yet, it is also completely cross-cultural and free to share. Mathematical science is the foundation for development. Many AIMS graduates have gone on to leading positions in civil institutions and NGOs, as well as in universities, research centres and companies across Africa.

AIMS is also planning the Next Einstein Forum (NEF), a global forum for science, the first ever to take place on African soil in 2015. Through the NEF, AIMS sets out to establish Africa as the next hub for global science.

About AIMS and the Next Einstein Initiative

The African Institute for Mathematical Sciences (AIMS) is a pan-African network of centres of excellence for postgraduate education, research and outreach in mathematical sciences. Its mission is to enable Africa’s brightest students to flourish as independent thinkers, problem solvers and innovators capable of propelling Africa’s future scientific, educational and economic self-sufficiency.  AIMS was founded in 2003 and has produced 731 graduates, about one third of whom are women. The goal of the Next Einstein Initiative is to build 15 centres of excellence across Africa by 2023.

For more information and to arrange an interview contact: