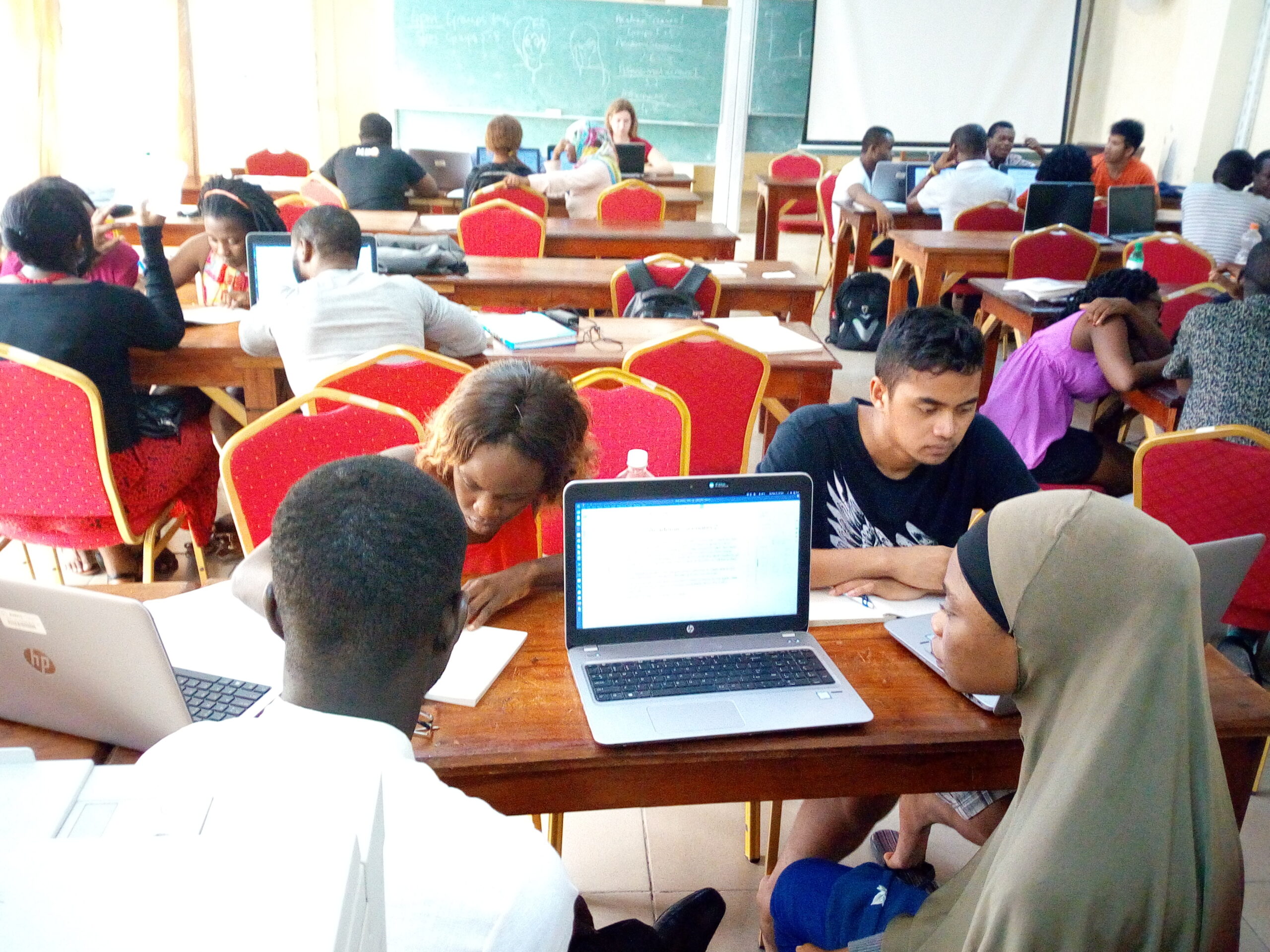 Students benefit from the experience of renowned visiting lecturers who teach for three weeks each. Capacity building is provided by tutors who are always available on campus to ensure a 24-hour learning environment. With degrees in Mathematics, Engineering, Physics, Statistics, Computer Science, Financial Mathematics as well as Actuarial Sciences, our 2020/2021 cohort comprises of 37 students (16 women and 21 men) enrolled in the Structured Master’s program. Our scholars are nationals of seven African countries, namely: Cameroon, Ethiopia, Ghana, Ivory Coast, Kenya, Nigeria, and Zambia.

All AIMS students are required to invest at least 20 hours in community service activities during the academic year to strengthen their leadership skills as well as their commitment to give-back to Africa.

“We should not underestimate the value of this feeling that AIMS is an institute in which we are all learning and teaching together with the common goal of sharing our knowledge and experiences with each other.”

AIMS tuition, study materials and housing are fully funded through a generous scholarship. AIMS’ residential nature allows more contact time between lecturers and students than is available in a typical university setting.

Students typically study two subjects for three weeks each, with each day comprising morning lectures followed by problem-solving and computing sessions each afternoon. Additional tutorials and special lectures are held in the evenings when students also usually complete their assignments. AIMS Cameroon is a bilingual institute (English and French), and we have students, tutors and lecturers from various nationalities. All lectures are in English only. Language training is offered in English and French.

Students and tutors of AIMS Cameroon reside on campus at Crystal Garden. They occupy single rooms with a communal living space and laundry facilities.

At AIMS Cameroon, students also get the opportunity to build relationships with one another over play, enabling them to strengthen their thinking and appreciation for a difference in thought processes.

Indeed, our game time is time away from Mathematics into the playground of logic, loaded with lessons that help our students learn social skills in preparation for a time when they will be called to serve.

In order to enable students take time off academic work, AIMS Cameroon has a number of Clubs in place to help students build synergies by working as a team to achieve goals that are non-academic in nature.

Amongst these clubs is the Sports Club and at AIMS, sports is fun!

In Limbe, AIMS Cameroon is located in Crystal Garden, near the Botanical Garden. This garden which is a significant center of attraction has a vast array of fascinating plants and runs alongside the Limbe river; and the Wildlife Centre hosting rain forest animals mainly primates (gorillas, monkeys and chimpanzees), crocodiles, snakes, antelopes and lots of weaver birds.

Situated on the East Coast in the Limbe III Sub-Division is Bimbia. This Historic Slave Trade Market is also an interesting place to see during your stay in Limbe. Structures of buildings which served as warehouses for slaves, chains, a “Door of No Return” and the Nicholls Island where ships docked to carry slaves to the Americas, can still be seen in Bimbia where hundreds of African-Americans reconnect with ancestors every year. Bimbia is also a special tourist destination because of its many stony Beaches, lowland forest and Mangrove Trail for ecotourism and bird-watching. Bimbia is also known for hosting the First School in Cameroon (1844), the First Printing Press in Cameroon (1844) and the First Translated Bible in Cameroon (1844); all created by a pioneer Jamaican Baptist Missionary called Joseph Merrick. He landed in Bimbia in 1843 and converted the locality to christianity.

Limbe is a beautiful seaside (Atlantic Ocean) tourist town known as “The Town of Friendship”. The town is an hour drive away from the city of Douala, the ever-buzzing economic capital of Cameroon and a half hour drive away from Buea home to Cameroon’s only volcanic mountain, Mount Cameroon, which is the highest point in the sub-Saharan western and central Africa, rising to 4,095 meters.

Limbe is on the southern slopes of the Mount Cameroon which is visible, with spring water flowing from several outlets. Because of the mountain eruptions, the beaches in Limbe are black.

There are several other places to visit in Limbe such as border villages with Nigeria, volcanic black-sand beaches, and a walk on the solidified lava flow of the 1999 Mount Cameroon volcanic eruption.

Limbe has two significant seasons which are: the Dry Season – from October to June and the Rainy Season from July to September. The city has a humid climate.

Debundscha, the 6th wettest place in the world, is situated in the outskirts of Limbe with an average annual rainfall of 10,299mm. The village of Debundscha lies at the foot of Mount Cameroon. It is believed the location contributes to its rains as the mountain blocks the clouds.