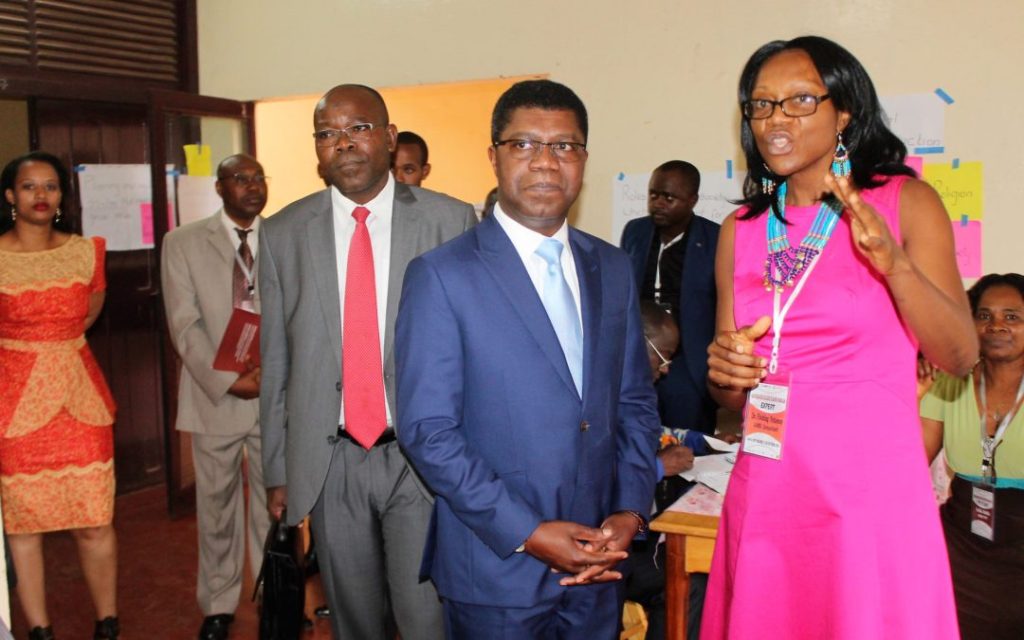 Mr. Zomahoun and entourage (Alice Umulinga and Paterne Nzahumunyurwa) were received by Prof ANDJIGA Nicolas, the Director of the Higher Teacher’s Training College ENS Yaoundé, which is home to the TTP coordination Centre. Prof Mama Foupouagnigni, President of AIMS Cameroon, guided them through their tour of the Pedagogic inspectors for Mathematics undergoing training. He participated in the session on Gender Responsive Pedagogy and Inclusive Education led by Mrs. Patience Fielding, the TTP consultant from the USA.

During an exchange with the participants, he offered some words of encouragement, intimating that he was honored to interact with “inspectors who will be agents of change and transformation in schools in Cameroon and Africa at large”. He went on to appreciate Prof Daniel Tieudjo, Director of the TTP program, for his hard work and conceptualization of an idea that will propel the development of Cameroon and Africa at large.

He praised Prof Mama Foupouagnigni for being one of the top 6 mathematicians in Cameroon and exhorted the inspectors to follow Prof Foupouagnigni’s example and take the training seriously. He suggested a policy review where University lecturers ought to start as Secondary school teachers for better understanding of the milieu.

Mr. Zomahoun spoke highly of the importance of gender policies and appreciated Mrs. Fielding’s training. He further contended that “majority of the decorated scientists are Africans, but they invest their knowledge and expertise in the West rather than in Africa”. He also pointed out that the “West steal our resources and take advantage of our lack of trained engineers and scientists”. In order to correct this mistake, it is primordial to train teachers on how to improve on their teaching to produce excellent future engineers, doctors, economists etc. because they will greatly contribute to the technological and economic growth and prosperity of the nation and continent.

Expert trainers and inspectors were motivated by the P/CEO’s speech and left with a renewed commitment. The trained pedagogic inspectors will be part of the TTP master trainers who will later on train in-service and pre-service teachers.