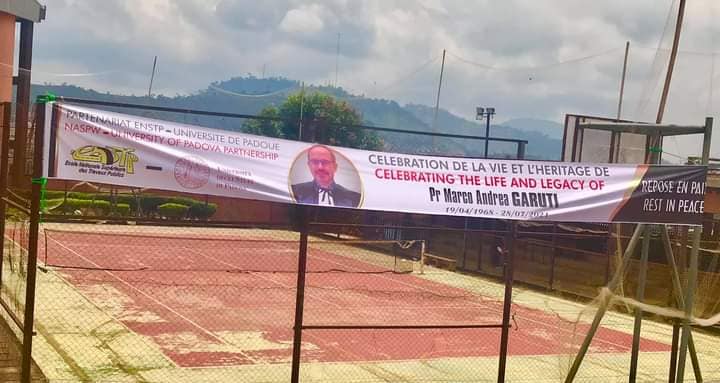 Students, Staff and the Administration of the National Advanced School of Public Works (ENSTP) in Yaounde yesterday August 25, 2021 gave academic honours to their departed Prof. Marco Andrea Garuti who died on July 28th, 2021 in Spain after a brief illness.

Dressed in black and led by their Director Prof. George Elambo Nkeng and the Deputy Director, Dr. Bwemba Charles, they celebrated the life and legacy of the Professor who was put at ENSTP’s disposal by the University of Padova in Italy.

In a tribute delivered during AIMS Cameroon’s Online Memorial Conference in memory of Prof. Marco Garuti, the Director of ENSTP said ENSTP mourns an outstanding teacher who made an invaluable contribution to the training of talented engineers

“We knew Professor Marco Andrea Garuti of the University of Padova, Italy, as an accomplished and enthusiastic lecturer who made Mathematical Analysis, Algebra and Geometry pleasurable. As master of the art, he laid a sound and lasting foundation in Mathematics which is very useful for engineering students. He was highly committed to the partnership between the National Advanced School of Public Works (ENSTP) and the University of Padova in the training of Engineers and Architects. With his easy going attitude, Professor Garuti could easily reach out to the staff and students alike who unanimously acknowledged and admired his gifted and highly inspiring teaching skills. As an Italian Professor highly fluent in English and French, Professor Marco Garuti was an asset for the National Advanced School of Public Works, enthusiastic promoter of bilingualism at all levels. His irradiating and warm smile readily made him a very nice person who could easily relate with the entire student and teaching community. With his sudden death, ENSTP mourns an outstanding teacher who made an invaluable contribution to the training of talented engineers. Professor Marco Andrea Garuti leaves a deep void that is difficult to fill. We hope that Professor Garuti’s primary educational purpose the teaching of Mathematics is preserved, protected and strengthened for the future generation as ENSTP and the University of Padova keep on with their partnership in the training of a new generation of Engineers and Architects for Cameroon, Africa and the world.”

In his tribute, the Delegate of ENSTP’s Third Architecture Cohort, Ndong Nkoulou Ghislain, also said Prof. Marco Garuti had positively impacted ENSTP students and left the image of a multidimensional Man. “The professor’s humanistic sense was read in his sociability which was and remains a model for any teacher who aspires to have good relations with his learners. His behaviour broke all barriers and stifled all (traditional) borders between him and us, his students. A simple being in character, he considered the point of view of every student and was attentive (paternal attention) to any warning of the difficulties, of a social nature, which the students faced.”

May His Soul Rest in Peace…