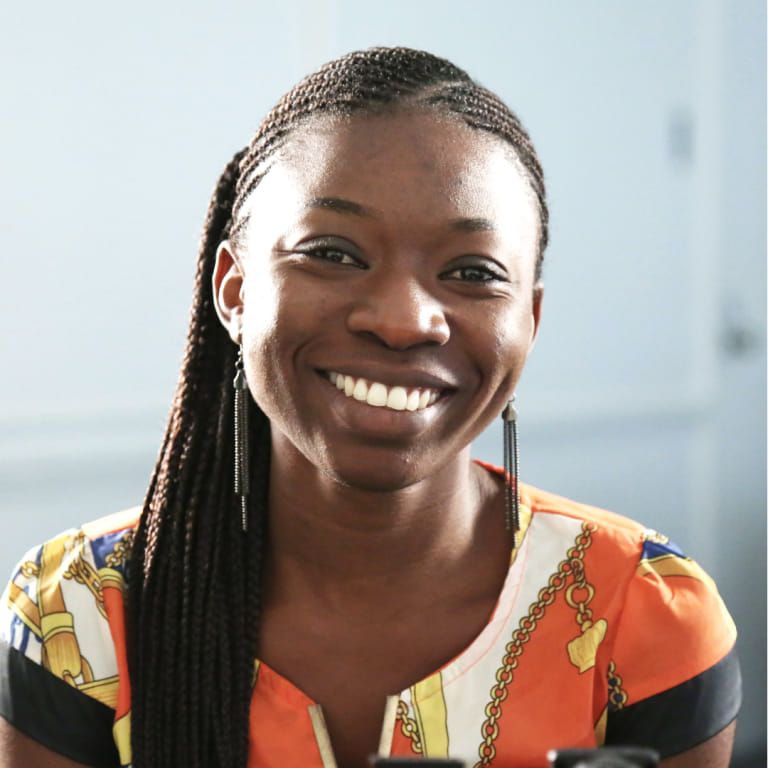 The Delta Kappa Gamma Society International has granted University of Toronto Graduate Student and AIMS Cameroon 2016 alumna, Margaret Ikape, a World Fellowship Award for the 2021-2022 academic year. Ikape – a graduate student at the David A. Dunlap Department of Astronomy and Astrophysics and the Dunlap Institute for Astronomy and Astrophysics – received the award for her contributions to scientific research and education.

Ikape is honoured by this news. “I feel very excited to be recognized for this award, and to know that my research and contributions to science education are acknowledged,” she says. “This further reinforces my desire to pave the path for young Africans in STEM disciplines.” Ikape’s research focuses on studying the details of an early phase in the Universe when it transitioned from neutral gas to ionized gas. Notably, she has also been a committed instructor at PASEA (the Pan-African School for Emerging Astronomers) for the last four years.

Her supervisor, Professor Renée Hložek, says she is pleased to see Ikape recognized by the DKG. “Margaret has both a thirst for scientific discovery and incredible tenacity,” says Hložek. “She is a strong and quiet leader, and in addition to her graduate studies, she has been giving back to the community – including public lectures and talks, outreach, and training of the next generation of scientists.”

Thirty-four applications were submitted at the University of Toronto, and ten were selected for the final adjudication, which was overseen by the International World Fellowships Committee in Austin, Texas. The DKG World Fellowship Fund was established to provide opportunities for international women to pursue graduate studies in Canada and the United States. Over one thousand women in 122 countries have received awards since 1960.
The Dunlap Institute for Astronomy & Astrophysics at the University of Toronto is an endowed research institute with more than 90 faculty, postdocs, students and staff, dedicated to innovative technology, ground-breaking research, world-class training, and public engagement. The research themes of its faculty and Dunlap Fellows span the Universe and include: optical, infrared and radio instrumentation; Dark Energy; large-scale structure; the Cosmic Microwave Background; the interstellar medium; galaxy evolution; cosmic magnetism; and time-domain science. The Dunlap Institute for Astronomy and Astrophysics, David A. Department of Astronomy & Astrophysics and the Canadian Institute for Theoretical Astrophysics comprise the leading centre for astronomical research in Canada, at the leading research university in the country, the University of Toronto.

Margaret Ikape Hopes To Train The Next Generation of African Astronomers

Margaret Ikape, the AIMS Cameroon alumna of the 2015/2016 cohort, holds a BSc in Physics and Astronomy from the University of Nsukka, Nigeria. After AIMS, the Nigerian-born Physicist went on to obtain another Master’s in Astronomy and Astrophysics from the University of Toronto, Canada and is currently a Ph.D. student in the same field at the said University. Passionate about bridging the gap between African Science students n the field of Astronomy, Ms. Ikape is currently part of an instructor team that organizes the Pan-African School for Emerging Astronomers, PASEA, a summer school aimed at introducing undergraduate students to the basics of astronomy using the inquiry method with a lot of hands-on activities, and at solidifying research and computing methods for postgraduate students. She was an instructor at this school’s 2017 and 2019 editions in Accra, Ghana, and Abuja, Nigeria respectively.

Margaret hopes that students will become aware of Astronomy and Astrophysics as a career option, and hopes to train the next generation of African Astronomers. She equally envisages a future where she is a role model to African youths, encouraging African girls, in particular, to pursue their dreams no matter what life throws at them. Her research interests mostly revolve around answering the unknown questions in the universe. At present, she is interested in understanding how the first stars were formed, and what their roles were in making the universe look the way it does today. She is also interested in building telescopes that can peer deeper and deeper into space to see the cosmic dawn.