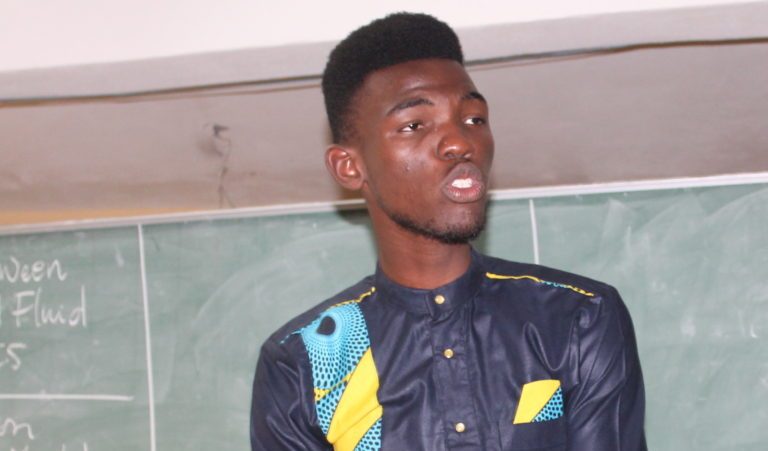 The Universe is currently described by two remarkably effective major theories: Albert Einstein’s GENERAL RELATIVITY, portraying the Universe at the macroscopic scale by providing a description of gravitation, and QUANTUM MECHANICS depicting the Universe at the microscopic scale by providing an explanation of the other three elementary interactions, namely: electromagnetic, weak nuclear and strong nuclear interactions. However, some phenomena in the Universe require the simultaneous application of both theories and therefore require the development of a theory of QUANTUM GRAVITY.

In his research project essay submitted in partial fulfillment of a Structured Master’s Degree at AIMS Cameroon on May 31st, 2019 at AIMS Cameroon, the valedictorian of the 2018/2019 cohort Yvan Jordan Ngucho Mbeutchou stated that GRAVITY is much more difficult to combine with QUANTUM MECHANICS than any other force. In recent decades, he argued, some analogies between gravity and thermodynamics, and hydrodynamics suggest that gravitation is an emergent phenomenon. Yvan Jordan gave a physical meaning to the analogy between gravity and hydrodynamics in particular. From two models: absorption and thermal, he found some aspects of gravitation in the Newtonian limit, and speculated the link with thermodynamics derived from the analogy between gravity and fluid dynamics. The relativistic description of his model was inspired by the Einstein-æther theory, which is a generally covariant theory of gravity containing a dynamical preferred frame.

Yvan Jordan even gave a public talk on his “Analogies between Gravity and Fluid Dynamics” research work at the AIMS Cameroon Centre on September 17, 2019.  He presented a new way to understanding Gravity through fluid dynamics which helped the new cohort understand the concept in another way. While introducing his talk with inspiration drawn from the origin of the Universe and the general quest by humans to unlock the origin of humanity as a whole, Jordan stated that “in order to understand the Scientific picture of the universe, gravity is an important piece to the puzzle”.