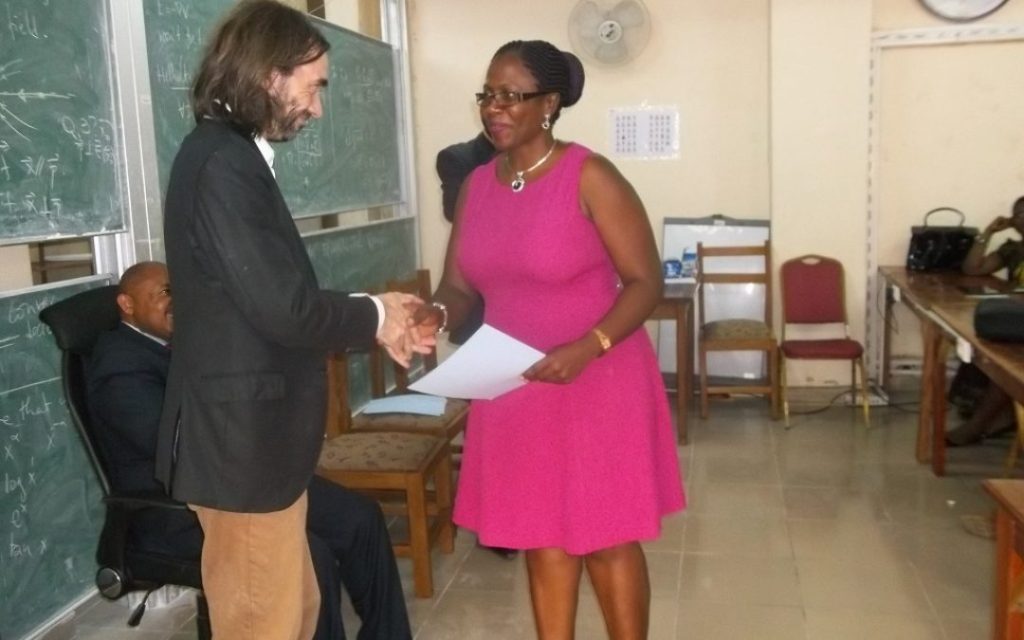 Since opening in 2013, AIMS-Cameroon has had three opportunities to welcome Field Medalist and Member of the French Academy of Sciences, Cedric Villani to Cameroon, especially to AIMS-Cameroon premises. The third being the longest was on the 19th of February 2016 were he was welcomed by students, tutors and staff. He spent a week at the center giving lectures, and discussions.

Some of the lectures were entitled:

He also took part in the ceremony of award of certificates to Civil Servants in Fako Division who participated in the Information Technology Training delivered by AIMS as an outreach activity within its social responsibility. This brought a lot of excitement to participants knowing that their certificates were handed to them by a Field Medalist. He spent Thursday the 25th February visiting the Bimbia Slave Trade Village with members of the Limbe III Council, a historical place where Cameroonians were housed while waiting to be shipped out to foreign Countries as slaves.

Finally, on his way back to the airport on Friday the 26th of February he stopped at the University of Douala for two hours. He gave a lecture on the topic “Mathematics in Progress”. This ended his visit to Cameroon and hopefully he will be back in 2017.

This is what one of the students had to say:

“Attending Prof Cedric Villani’s course was the best thing in my life as an upcoming Mathematician. I had an opportunity to interact and consult the winner of Field Medal in Mathematics, an opportunity that doesn’t happen every day. I was especially thrilled by his humility and determination to see his students gain maximally during his course. I enjoyed his openness in discussions, objectivity of purpose and I learnt a lot during our interactions. His course though challenging in terms of rigor, was generally enjoyable and informative.”

The week long seminars he offered were inspiring and enlightening. He delivered his services with admirable zeal and passion. Prof Cedric endeavors to ensure that he answered students’ questions. His presence was just a motivation to many of us. The light moments we had during meal times, presented an approachable, loving and caring Professor”.