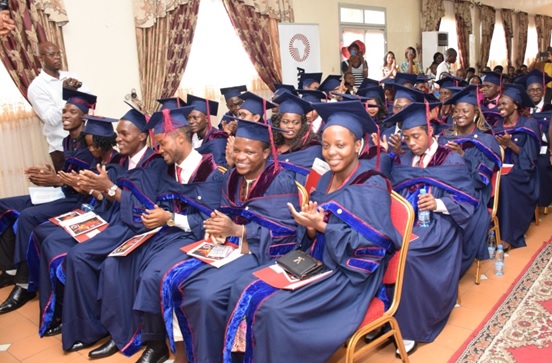 Smiles shone on the faces of this year’s 37 graduates as they reaped the reward of a year of hard work, Commitment and discipline. The Graduation Ceremony took place at the Limbe City Council Hall on Thursday, June 27 under the patronage of the Minister of State, Minister of Higher Education.

The 37, made up of 16 females, all from 10 African Countries, were celebrated by Prof. Marco Andrea Garuti, AIMS’ Academic Director, who revealed that the cohort was selected from over 3000 applications to the AIMS network submitted by the best candidates and bright minds from all over the African continent.

Presiding over the event, the representative of the Minister of State, Minister of Higher Education, Prof. Wilfred Nyongbe Gabsa, Secretary General at the Ministry of Higher Education, lauded the efforts of the graduates while urging them to be torchbearers and worthy ambassadors of the institution as they move on to their respective careers. Extending congratulations to the Institute and its President, Prof. Wilfred Gabsa stated that the government of Cameroon has observed the achievements of AIMS-Cameroon since its creation in 2013 with great interest. “It is for this reason that the Memorandum of Understanding established between AIMS and the Cameroon government has recently been renewed, giving AIMS access to government funding for another five years” he said.

He also thanked the Limbe City Council represented by Mr. Samuel Mbua, for the generous offer of 2 hectares of land for the construction of an AIMS-Cameroon Campus at Ngeme within the Limbe Municipality.

The overall best student and Cameroonian-born, Jordan Ngucho, disclosed that the journey was full of thorns as they were only able to make it through the spirit of determination, perseverance and hard work imbibed at AIMS. “Many people have talents but rare is the courage to follow them where they lead, AIMS has greatly helped us in defining our career paths” he quoted.

Speaking during the event, Prof. Mama Foupouagnigni, AIMS-Cameroon Center President, stood proud as he congratulated the graduates on a job well done. Referring to Mathematics as a toolbox for everyday life, Prof. Mama said “there is no life without Mathematics as everything we do nowadays depend on Mathematics”. His discourse focused on 5 fundamental questions which gave a clear insight as to the activities carried out at AIMS-Cameroon, the achievements thus far, some future plans and an acknowledgment of the support pillars of the AIMS initiative. “We are the ones to solve the development challenges we face. No one else will do it for us. Thus, it is important to train brilliant minds to come in with diversity in knowledge, so as to thrive in this mission” he explained.

Prof. Mama, while thanking the Government of Cameroon for their unwavering support, divulged that the construction of the first phase of the AIMS-Cameroon permanent campus at Ngeme has been approved. Haven being charged with the responsibility to build this first phase, the AIMS-Cameroon Center President informed the attentive guests that the design has been completed and approved by the AIMS Advisory Council and there shall also be an extension of the AIMS-Cameroon educational offer to include other programs such as Data Science, Artificial Intelligence, Machine Learning, and Econometrics.

Expounding on Peace and the symbiosis between Mathematics and Communication, the guest speaker, Madam Ndoh Bakata, SONARA Board chair, Communication expert and adviser to the Prime Minister, urged the fresh graduates to make use of Mathematical analysis in finding solutions to the restive situation in Cameroon, especially in the South West Region. “Mathematical analysis can lead to a better understanding of situations and although Mathematics might not teach us how to end war or fix a broken heart, it does teach us that every problem has a solution” she said.

The graduates also had the opportunity to listen to highly inspiring words from the Vice President and Chief Programs officer of the AIMS network, Mr. Romeo Essou, the AIMS Cameroon Interim chief operating officer, Mr. Honore Bernard, an AIMS Cameroon Alumnus, Dr. Nkongho Arreyndip, and Ms. Babem Annette who spoke on behalf of the tutors.

12 out of the 37 were awarded prizes for thriving with exceptional grades. The best 3, Jordan Ngucho, Francisca Olajumoke from Nigeria and Pierre Marie from Cameroon, all received laptop gifts, while the others received smartphones and headsets from partners and donors. The best three female students were not left out as they received a token of 130.000 FRS from an AIMS-Cameroon Partner.

The graduation ritual was conducted by the Vice Chancellor of the University of Buea, Prof. Horace Ngomo Manga who doubles as the President of the AIMS Advisory Board. This year’s 37 graduates now add up to a total of 253 that the Limbe center has trained since inception in 2013.