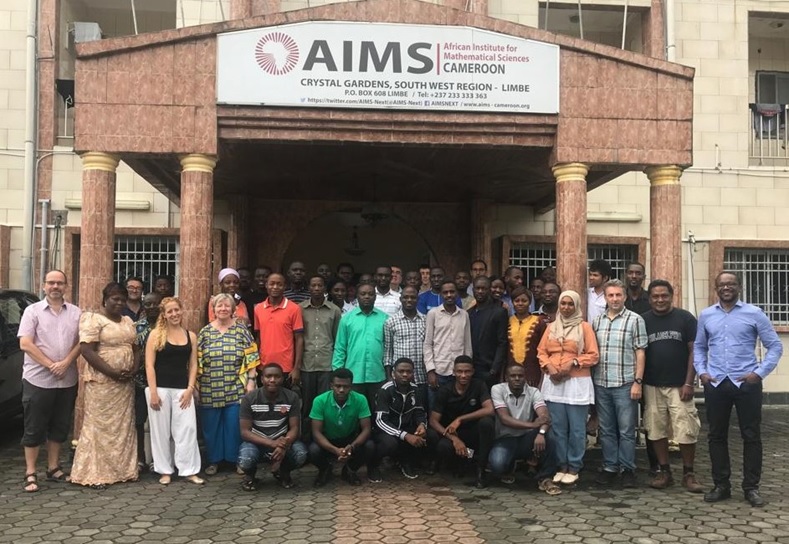 AIMS-Cameroon has recently been host to a two-weeks-long CIMPA School program which commenced on July 2 and closed on July 12, 2019.

The Centre International de Mathematiques Pures et Appliquées  (CIMPA), founded in France in 1978, is a non-profit organization that promotes research in Mathematics in Africa and Developing countries.

Bringing together 51 participants from 18 countries, this year’s CIMPA School aimed to offer an intensive teaching session to graduate students and young researchers in a bid to promote research in Mathematics.

Six courses were delivered by six lecturers on the topic, “Algebraic Geometry, Number Theory and Applications in Cryptography and Robot Kinematics”.

Among the six lecturers, three proposed mini-projects to participants to evaluate their understanding of the courses delivered. The Participants formed 10 groups of three to four students to tackle these projects which they later presented at the end of the program.

Aminatou Percha, Co-organizer of this year’s CIMPA School from the University of Maroua, Cameroon, expressed satisfaction at the end of the program as she expressed that the students have received a substantial amount of knowledge, relevant for the academic journey. She went on to say that, the students were diligent, hardworking and very interesting.

Talking to one of the participants at the end of the program, Ms. Deborah Amani, AIMS-Cameroon alumnus, said “the project was good, very interesting and everyone was satisfied. I discovered new topics like the application of Algebraic Geometry to Robot Kinematics”.

Certificates were said to be later awarded to all participants.