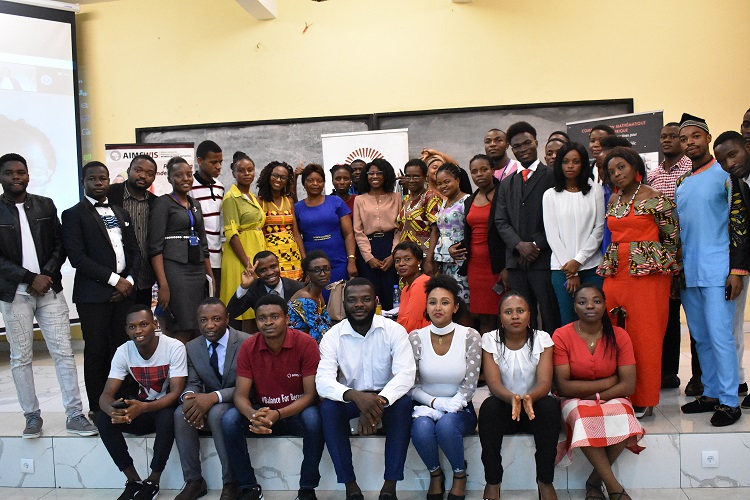 After exhibiting talents in music and drama in recent events, students of AIMS Cameroon’s 2020/2021 cohort have proven once again their gifts in entertainment by filling the ceremony to celebrate the International Women in Mathematics Day on May 12th with lots of fun.

The ball was set rolling for the celebration by the Chief Operating Officer (COO) of AIMS Cameroon, Honoré Bernard Youfegnuy, who in his welcome address pointed out the importance of Mathematics in daily life and was more concerned about social justice. He saw the need to question about how people choose Mathematics and in what way the process is gender-inclined. He observed that there is tension in young women who are engaging in Mathematics since the subject at that early stage is linked to masculinity, with boys securing higher grades in class. However, he pursued, the gap between boys and girls in Mathematics performance is getting smaller and in some cases, like in AIMS Cameroon, girls are likely to have better grades than the boys. “This means that if girls are given the right mindset and environment, they will be far better in Mathematics than the boys,” he stated.

That notwithstanding, the decision to continue with Mathematics at higher levels of education are gendered because the higher the level the lesser the girls. “And that is why there is the need to celebrate Women in Mathematics,” the COO stated, explaining further why the date chosen was the day of birth of Maryam Mirzakhani; the only woman to have won the Field Medal which is the most prestigious award in Mathematics. Honoré Bernard Youfegnuy then told the inspiring academic story of the mathematician from Iran to the US successively in Harvard, Winston and later in Standford. “Maryam Mirzakhani is a great source of inspiration to female mathematicians all over the world,” said Honoré Bernard Youfegnuy.
If in the past AIMS Cameroon celebrated the International Women in Mathematics Day with a movie projection, the COO noted that this year had seen improvement with an agenda for activities and promised to do a bigger celebration next year if Covid-19 threat disappears, given the need to support and encourage all interested in Mathematics to participate in the profession.

With swift yet perfect transitions by students Lynda Zeugue Donfack and Boluwatife Joshua Aderinto; the duo Masters of Ceremony for the day, the hall was electrified by a video projection of experiences by a secondary school mathematics teacher, a few of her students, followed by an episode of memorable Fun Games involving all students staff and guests.

Coordinated by students Lucy Kimotho Wangari and Bernadin Tamo Amougou, the hall was filled with much laughter and excitement. Breaking the ice with a hi-five meet-and-greet session and a semi-circle where the players had to say words ending with ‘tion’ and “tic”. Wangari and Tamo then moved the audience to form teams for a Words Challenge and find out the highest number of the 285 English words in the word “ONOMATOPOEIA”. This was followed by CHARADES whereby members of the teams had to guess a word or phrase from the actions of a team mate who was not allowed to speak. During the GAMES, teams were assigned to identify different objects in a box.

After a documentary depicting the challenges faced by a few female scientists, the audience was edified by a Panel Discussion moderated by AIMS Pedagogic Adviser for the Teacher Training Program, Mrs Babila Emilia née Ghogomu who invited the panelists and high mathematics achievers to say, among others what attracted them to Mathematics and how they succeeded in lining up achievements in mathematical sciences, in order to inspire the young ones. Intervening online from the USA, where she has been teaching Mathematics for three years, Prof. Miranda Teboh-Ewungkem recounted her days back in the University of Buea where she obtained her BSc and MS degrees, emerging as one of the three best Mathematics students at the University.

AIMS Cameroon 2014 alumna Dr. Pauline Milaure Ngugnie, now a researcher in Life Insurance and Financial Engineering in Belgium, said she entered Mathematics because she saw less girls than boys and so adopting Mathematics was to due to that gender challenge. University of Buea lecturer and Mathematician Dr. Fomboh Mary also recounted the beginnings of her 30-year-old teaching career and her achievements.

Several more fun activities, award of prizes for the games and refreshments, were more highlights of the edifying celebration at AIMS Cameroon’s campus in Limbe on May 12th.