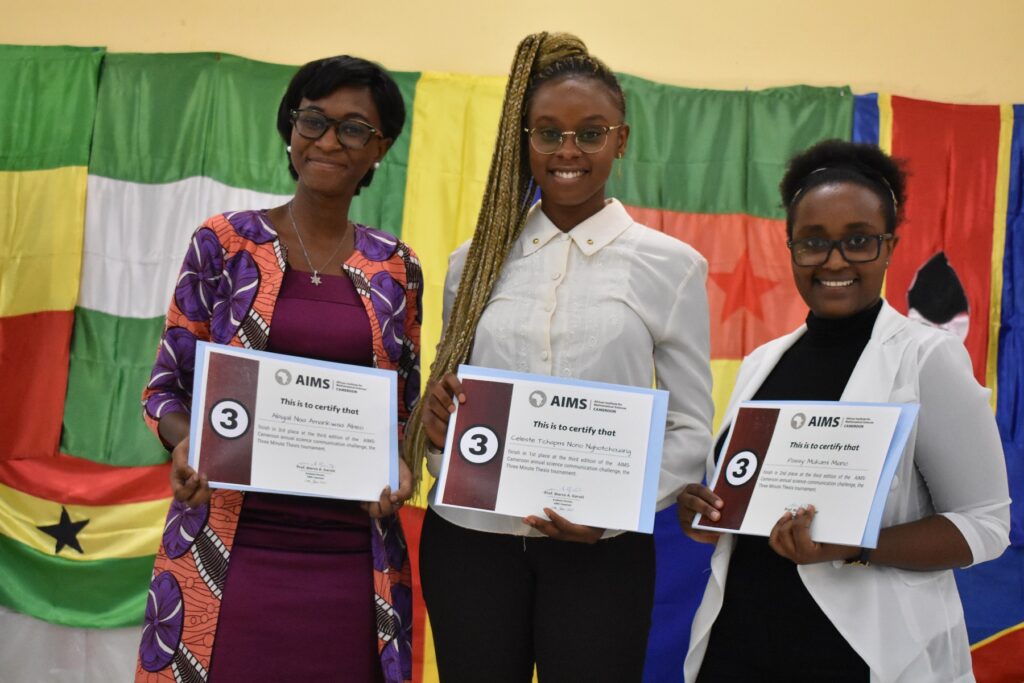 With her presentation on “Healthcare Fraud Detection Using both Bayesian and Non-Bayesian Methods”, Celeste scored the highest average of points awarded by the jury which used clarity, content, stage management, mastery and time management as assessment criteria.

Celeste enables Cameroon to lift the trophy of the third edition of the Three Minute Thesis after Francisca Olajide of #Nigeria and Rose Bandolo of #Cameroon won the two preceding editions, respectively. She also sustained the legend that no man has ever won the #3MT competition in AIMS Cameroon.

The proclamation of results concluded four tough days of competition. 37 students split into three Groups participated in the qualifying rounds on June 4th, 5th and 6th before the Grand Finale yesterday June 12th.

In a speech delivered to the students yesterday morning, the Centre President of AIMS Cameroon, Prof. Dr. Mama Foupouagnigni, explained the importance of the annual ‘Three Minute Thesis’ Competition. He said the objective of the 3MT is to enhance the communication skills of AIMS Cameroon students to communicate science to non-scientific audience.

“Less than 5 or 10% of citizens are scientific people and you will have to communicate science to everyone. You will have to explain to your family back at home what you did in school and how it is important for the community, the country and the continent. So this competition is really aimed at pushing you to improve your communication skills in science especially when you are addressing a non-technical audience. It forces you to reflect on what your thesis is all about, the problem you want to address, how you will address that problem but most importantly, what is its relevance to the country and the region, among others. So, I am really pleased that the students are supporting this initiative and that they are happy to compete,” he said.

Prof. Dr. Foupouagnigni also reminded the students that in future, whether as scientists or in the administration, they will have to communicate and that this is the right time to learn. “If you don’t communicate, you don’t exist,” he emphasized. The Centre President also urged the men to stand up since no man had won the annual competition since it was launched two years ago. He also expressed his anxiety to see the winner.

And it came to pass that three women occupied the first three positions in the 2021 #3MT competition which was well organised and disputed. Prof. Marco Garuti did not fail in his closing address to thank the students and staff for the successful Third Edition of the #3MT competition■