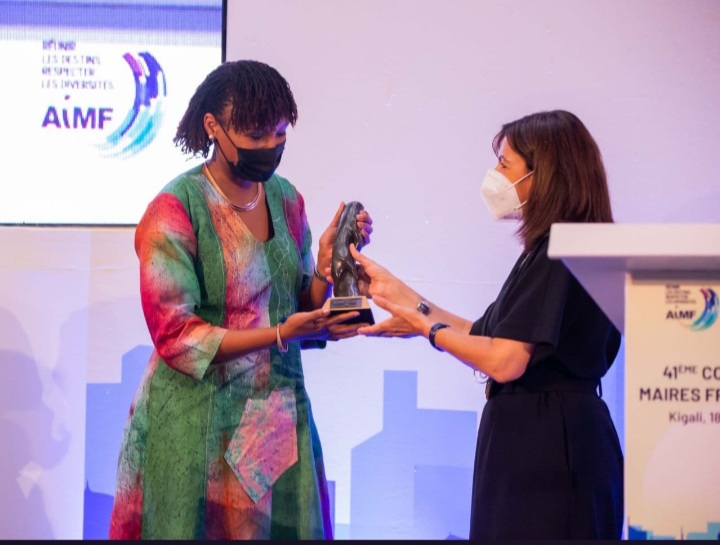 “Together, we can change the world. I invite you to dream with me,” a tweet by the African Institute for Mathematical Sciences quoted Ms. Lydie Hakizimana who had just returned to Kigali after a working visit to Limbe in Cameroon where she participated in the Graduation Ceremony of the 8th Cohort at AIMS Cameroon on July 16th, 2021.

Every year, AIMF gives the Francophone Woman of the Year Award during its General Assembly. The two laureates this year were Lydie Hakizimana from Rwanda and Douangmala Phommavong from Laos. Both were compensated for their engagement in favour of the education and participation of women and girls in local life.

Lydie Hakizimana is a seasoned educator, successful entrepreneur, and the Chief Executive Officer of AIMS.

As founder & CEO of Drakkar Ltd, a pioneering Rwandan educational publishing house, Lydie has over 10 years of experience in production and distribution of textbooks. Through her work at Drakkar, Lydie edited and published 16 Kinyarwanda titles and distributed over one million textbooks. Drakkar’s textbooks have been supplied to 3,800 primary and secondary schools, reaching three million children across Rwanda.

Lydie previously worked for OTF Group, a Boston-based consulting firm which advised the governments of Rwanda and Gabon in Information Communication Technologies, the Hides and Skin, and Timber industries respectively.

Lydie earned a Master’s in Public Administration from the Harvard Kennedy School of Government in 2018, and is a certified Montessori teacher from the North American Montessori Center (NAMC) in Canada. She is a recipient of numerous awards, including the Mandela Washington Fellowship in 2016 and the Archbishop Desmond Tutu Fellowship in 2013. She sits on the board of the African Leadership University.