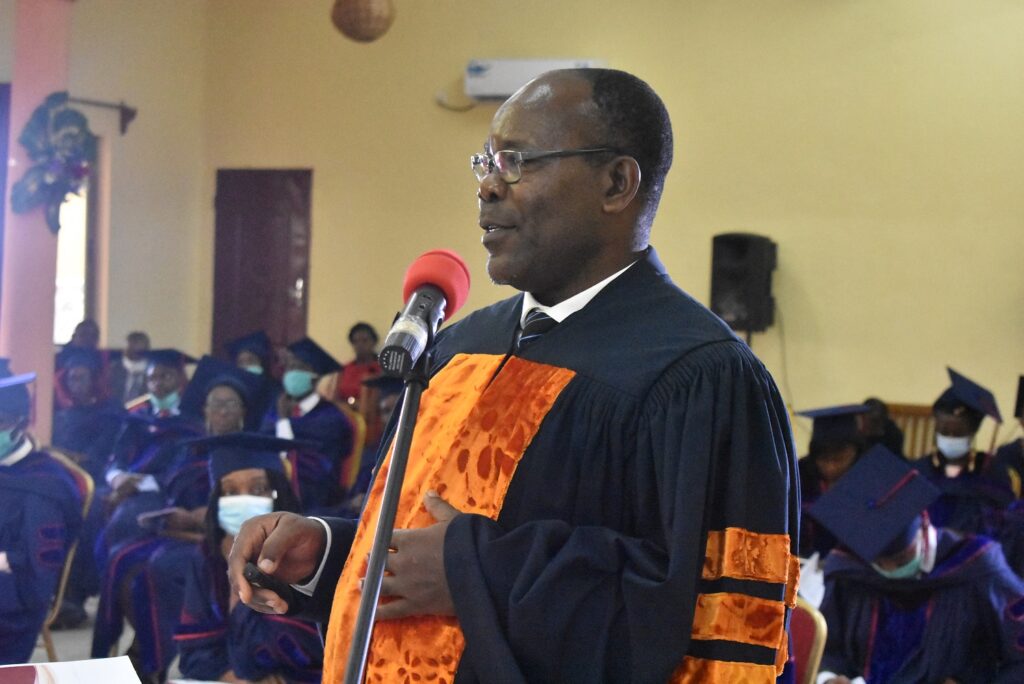 25 milllon lives were saved by Mathematicians who cracked the Enigma code used by Nazi Germany to transmit secure information within the German army of 13.6 million soldiers. The mathematicians helped give the Allies an advantage in the naval struggle for control of the Atlantic during the Second World War.

This little-known contribution of Mathematics to humanity was one of the highlights of the 8th Cohort Graduation Ceremony at AIMS Cameroon on July 16th 2021 during the “Discourse on Mathematics, Enigma Machine and the Second World War” delivered by the Centre President of AIMS Cameroon and Chief Academic Officer of AIMS Global Network, Prof. Dr. Mama Foupouagnigni.

The academic edified his audience by drawing the link between mathematical concepts used by a few brilliant minds and why AIMS trains fewer students than expected.

In the presence of the High Commissioner of Canada to Cameroon, the Secretary General of the Ministry of Higher Education representing of the Minister of Higher Education, and the Representative of the Vice-Chancellor of the University of Buea, amongst other guests such as the Chief Executive Officer of AIMS Global Network as well as the 2021 graduating students, Prof. Dr. Mama opened his discourse with the composition and setting up of the Enigma Machine invented by German-born Arthur Scherbius (1878 – 1929) and how it could code and decode messages. Nazi Germany acquired the machine, improved it and used it to boost the efficiency of German military communication. With very secure information, Germans could attack from anywhere. They found an unbreakable way to code their message. Messages could be intercepted but not understood because they were coded. The mathematicians behind the Enigma Machine applied mathematical models like Permutation, Transportation and Cycles,” explained Prof. Dr. Mama.

However, the code was cracked by the young mathematician Marian Rejewski in the University of Poznan. “His excellent mathematical education, fluent command of German, exceptional intuition and completion of a course in cryptology, together with the intelligence information he received from the French Secret Service, led to his success,” explained Prof. Dr. Mama. In effect, Rejewski applied techniques from group theory, especially theorems about Permutations – in his attack on the Enigma code.

When the Germans developed the advanced version of Enigma well used in the Second World War, another brilliant mathematician called Alan Turing yielded the first systematic method for cracking Enigma messages in 1942. To crack the Nazi code and enable the Allies win World War II, Alan Turing used an electro-chemical machine, a forerunner of modern computers. It was called the Bomb Machine which was an electromechanical device that replicated the actions of several Enigma machines used together, thereby reducing the time needed to decode.

Arthur Cherbius, Rarian Rejewski and Alan Turing were thus three great minds with great ideas and great solutions. For Prof. Dr. Mama, AIMS training was focused on training brilliant minds. “We don’t care about the number but focus on a few that can change the destiny of a whole continent. It’s not a matter of numbers. Only a couple of great ideas or solutions can change the destiny of the continent. This is our mission to train great minds,” concluded Prof. Dr. Mama.