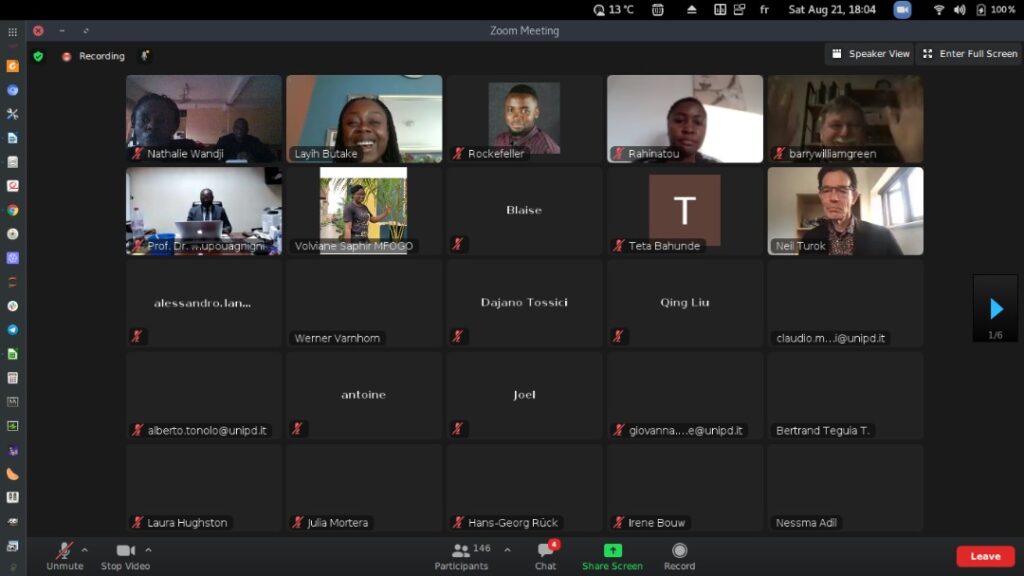 “In our deepest sorrow, we remember and salute Marco Garuti, one of AIMS most cherished members. His contributions were exceptional and he will never be forgotten. He probably is gone but we can feel this afternoon that his memory is alive…,” said AIMS Next Einstein Initiative Founder and Board Chair, Prof. Neil Turok, while closing the four-hour-long online Memorial Conference organised by AIMS Cameroon in memory of her Academic Director Prof. Marco Garuti who passed away on July 28th, 2021.

Over 389 participants accepted their invitations to the online conference where tributes from delegates of various cohorts since 2014, lecturers, tutors, government, the University of Buea, the National Advanced School of Public Works in Yaounde, and the Garuti Family were delivered and appreciated by Prof. Marco Garuti’s widow, Mrs. Christine Garuti.

“A highly talented colleague with a calm demeanour, Marco was passionate about his work and spoke proudly of his students’ achievements. He will forever be remembered for his gentle temperament and, above all, for his role in honing the skills of the next generation of African scientists,” said the CEO of AIMS Global Network, Ms. Lydie Hakizimana. The Secretary General of the Ministry of Higher Education, Prof. Wilfred Gabsa Nyongbet urged the AIMS family to see to it that “Prof. Marco’s legacy stays.”

After an emotional tribute to his trusted collaborator, the Centre President of AIMS Cameroon, Prof. Dr. Mama Foupouagnigni announced the creation of the “PROFESSOR MARCO ANDREA GARUTI EXCELLENCE AWARDS” to celebrate the overall best students, notably in the courses late Prof. Marco taught at AIMS. “The AIMS Cameroon Library, the current and the future one in the new premises whose construction is to start anytime from now, will be named the PROFESSOR MARCO ANDREA GARUTI LIBRARY,” added Prof. Dr. Mama Foupouagnigni.

It was a memorable event in honour of the selfless, very kind and proactive professional who, according to his friend Dr. Paulo Guitto, “considered AIMS as an opportunity to give his contribution to Africa. He was the most Cameroonian of all of us.”