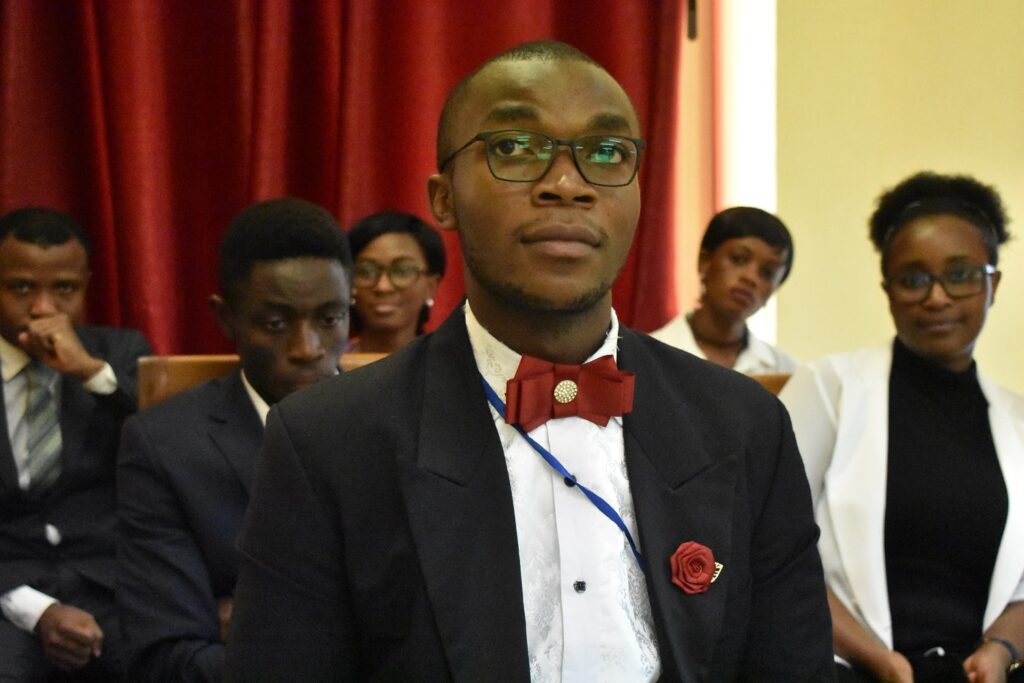 The Academic Director, Prof. Marco Garuti, made the announcement yesterday to the 38 graduating students of the 8th Cohort of AIMS Cameroon’s Structured Master’s Degree program..

True to form, the end of the academic year at AIMS Cameroon came with its usual rollercoaster of emotions for the students, who having finished the defence of their research projects, earned the right to view their result slip for the year.

To put this in context, it is worth noting that throughout the academic year at AIMS Cameroon, students are not told their grades in any of the eleven review courses they take. This allows them to focus on mastering the material and encourages positive competition and collaboration amongst the students. However, when all work is done and in the lead up to the graduation ceremony, the Academic Director rallies the students to announce the Valedictorian for the class before returning to his office to click-send on the mailing system of the institution, so the students can receive private emails with details of their results along with their annual averages.

This news is seldom welcomed with joy for students, which is evidence of the competitive spirit that garnishes the mood on our campus.

This year, with the introduction of the three degree streams, news of the valedictorian was highly anticipated to validate the strength of one stream over others, again another form of healthy competition pushed in the campus corridors. While the Fundamental Science students were ranked the nerdy group, the Data Science and Climate Stream students were not ready to let go the crown without a fight.

When the day of reckoning finally arrived and with the students assembled in the auditorium, the Academic Director broke the news that the Data Science student, Bernardin Tamo who doubles as Class Delegate was this year’s valedictorian. With this announcement, the students settled the internal debate for the streams and resigned the fight for those who will come after them.

While other streams were sad to lose the race, the students were all in agreement that this was well-deserved by the class delegate who had championed the culture of working together in his catchphrase “working together is success”. Tamo’s commitment to his goal all year has been unquestionable and his dedication to working in groups was unmatched.

This success is thus a validation of the things AIMS Cameroon has preached, the values and standards they have held the students to, as well as the culture of pan-Africanism which is enshrined in its existence.